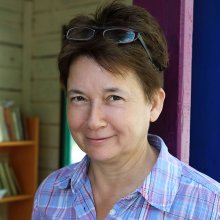 She was born in Szentendre. She graduated at Zsigmond Móricz Secondary School in her native town. She got a university degree of Hungarian language and literature at Loránd Eötvös University. She was librarian at the Department of Hungarian Etymology of ELTE, later she worked for the Hungarian Television. She was editor of cultural and educational tv shows. She worked as web editor since 2000. She worked for the 1956 Institute where she was the editor of several content developments and oral history interviews. She was also the photo editor of a number of publications of the Institute. After the Institute was moved to the Széchényi National Library in 2012, she continued to work for the Institute as librarian and web editor of the 1956 Institute – Oral History Archive Department. She resigned from his job when the Institute was transferred to Veritas Institute in 2019. She is librarian of the local cultural center in Szigetmonostor.