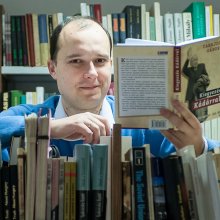 He was born in Budapest. He got a university degree in history and political sciences at Loránd Eötvös University in 2004. He was interested as a young scholar mostly in the history of the state security police and in the issues of the Hungarian democratic traditions in the the 20th century. He received a PhD degree with his thesis on the politics of cooperation of the Hungarian Socialist Workers’ Party between 1956 and 1963. An abridged version of his monograph was later published with the title Compromise with Kádár at Jaffa Publishing House.

He was founder and coordinator of the working group White Ravens which united young historians and archivists. He studied the Cristian democratic traditions after WWII in Hungary by means of a Bolyai scholarship between 2014 and 2017. Later he was engaged in historical projects focusing on the youth history.

He was research fellow at the 1956 Institute – Oral History Archive Department of the Széchényi National Library between 2014 and 2019. Recently he works for the Office of the Committee of National Remembrance. Besides his scholarly activity he is strongly engaged in the publications of documentary and informative materials for the wider public.