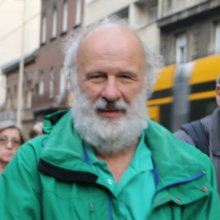 He was born in Budapest in 1955. His first article was published on November 4, 1988 in the literary periodical Élet és Irodalom (Life and Literature) about the volley of October 25, 1956 in Kossuth square. His first study entitled Bloody Thursday analysed the same topic in Századvég (The end of the century) three years later. In the same year he edited a book on the hand written testimony of István Angyal.

He was research fellow of the 1956 Institute between 1991 and 2019. His main field of interest is the history of the 1956 Hungarian revolution. He dedicated to it twenty monographs and approximately 250 articles. He suggested the story for the movie Kolorádó Kid directed by András B. Vágvölgyi. He assisted the works of several documentaries about the 1956 revolution. In 2013 he published a book on the Gergely Csiky Theatre of Kaposvár. Find his personal website at www.eorsilaszlo.hu